Moore Family ADU Defines Why This Housing Option Is So Powerful

56
SHARES
349
VIEWS
Share on FacebookShare on TwitterShare on LinkedIn

You can not find anyone it seems who has not been hit either directly by the housing crisis or at least been sideswiped by it.  With rents at all-time highs and median home prices in Hillsboro, Oregon at $550,000 (September 2020 via RMLS) it is becoming hard for new people to move here and existing folks to stay.  Despite trying urban growth boundary expansions to increase supply there are just too many buyers and not enough sellers.

One creative solution that has been used around the Nation and here in Oregon is the implementation of rules that allow additional units on existing lots.  While there are many names for them (SDUs, Granny Flats, Guest Homes) the accepted term in Hillsboro is Accessory Dwelling Units or ADU.  The concept is simple.  Find some open land on your lot and add an additional home.  Although that sounds easy the process can be very expensive outweighing the benefits.

Before we showcase one local family’s ADU journey let’s look at the Hillsboro Municipal Code that governs ADU’s. Code 12.40-100 says:

2.     Allowing more efficient use of existing housing stock and infrastructure;

3.     Providing a mix of housing in response to changing family needs and smaller households;

4.     Allowing seniors, single parents, families with grown children and other residents to remain in their homes and neighborhoods; and

5.     Providing a broader range of housing types and costs.

B.     Approval Process. Where permitted, ADUs are subject to review and approval pursuant to Section 12.80.040.

C.     Creation of an ADU. An ADU may be attached or detached from the primary dwelling on the lot, and may be created as follows:

a.     Converting existing floor area in an existing dwelling or attached accessory structure such as a garage; or

b.     Adding new floor area to an existing dwelling or accessory structure. An ADU connected to the primary residence by an architectural or structural connection between the dwellings (such as a breezeway) is considered attached.

a.     Constructing a separate unit on a lot with a new or existing primary dwelling; or

b.     Converting existing floor area in an existing detached accessory structure such as a garage.

There are a lot of other rules about the design, size, and placement of the ADU- you can review all of those here:

We can all understand the reasons for adding an ADU – there as many reasons as there are household types.  Aging in place, housing family members on the same land, creating a rental for income- all great reasons to look at this option.  And as the codes indicate the ADU can be attached or detached and garages and other spaces can be converted.

Over on SE 8th Street not far from the SHARCC swim center David Moore and his family took on the challenge to add a place for their parents.  It was a special honor for me to be invited to see their ADU project take hold from the early stages to the completed home.   When finished the ADU was designed to be 1 BR and less than 750 SF with no garage.

We interviewed David to get a few answers to questions that we hoped would reveal more.

HH: David, what were you and the family looking for when you decided to build an ADU? What was the motivation(s)

DM: We wanted to have a place for my in-laws to live close by. They are getting older and have ongoing medical issues. They are needing more help, and my wife had been making frequent trips to AZ to help them. We didn’t want to put them in an old folks home, nor did we want to move to AZ, but we couldn’t keep flying to AZ every month.

HH: Once you got moving what were the biggest challenges and obstacles?

DM:  It was hard to decide if we would build in our existing garage or build detached. It was hard to understand what we could do with a limited budget that would meet code. We had some issues with the fact that we were building on a concrete slab. I guess that is not common in the area, but we wanted to keep it as low to the ground as possible to make it handicap accessible for the future.

HH:  What were some surprises that happened along the way?

DM:  We found an old garbage pit with some interesting things in our back yard including an old iron, interesting glass bottles, and square nails. We also decided to add big skylights – totally with it.

HH:  Now that the ADU is done how is it going? Is it everything your family was hoping for?

DM:  Awesome! Perfect! We love it!

HH:  In the end what lessons can you pass on and what should people know who decide to take this on?

DM:   Lots of windows! The vaulted ceiling in the living room really helps it feel more spacious. Be prepared to downsize if you are moving into 450 sq ft.  I’m so glad the contractor added cat 6 ethernet cable to the house underground when he did the other utilities because now we can share our gigabit-speed internet from Hillsboro’s HiLight fiber optic internet service. Be sure and have a good plan from an architect that fits your property and existing house. I love that ours totally fits. Have a good contractor you can trust.

HH:  David, thank you and the home looks amazing!  Many happy years to you and yours there!

Have look at the general location of the Moore’s home and new ADU.  This additional unit with a life of at least 100 years will allow the occupants to walk to the parks, the hospital, shopping, and downtown Hillsboro and never take a car.  Overtime enough ADUs can create about 20% of the housing needed to supply the housing market in Hillsboro. 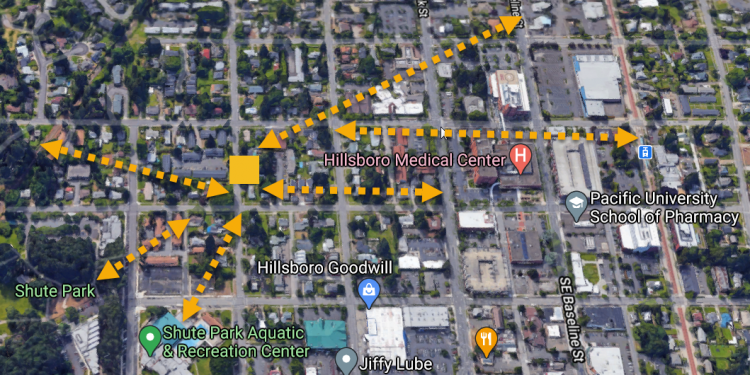 The Moore’s ADU ran about $85,000 dollars.  The payment on that much debt at current rates would cost about $400 dollars a month yet the rental income could be $1,300.  For homeowners not needing the additional unit for family or guests, the income can be substantial.

Hillsboro has not yet adopted codes as allowed by the State of Oregon under Senate Bill 2001 which allow the construction of 2 ADUs on lots already built upon.  Tigard, Portland, and other cities have already approved those rules and are having some real success.  The Moore ADU was a total success and the beauty and simplicity of the design and setting will forever compliment the century-old home that is the primary residence. 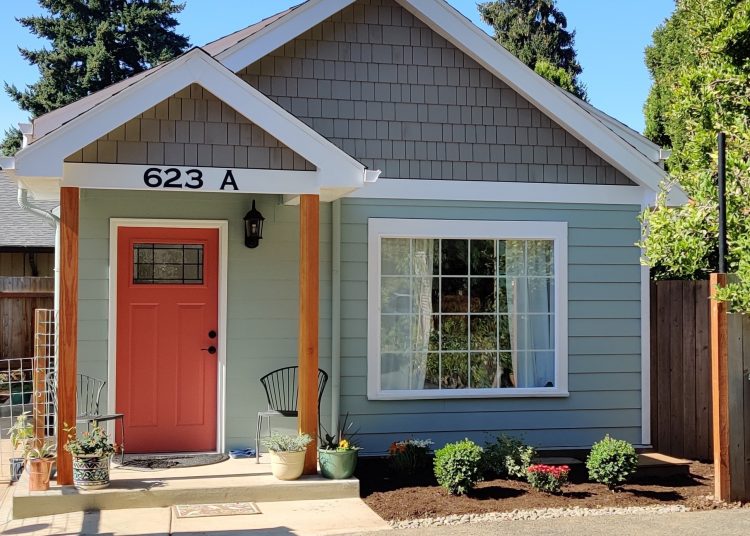 What Do You Want In An Inclusive Playground?

Could Electric Semi Truck Charging Be In Hillsboro’s Future?