23
SHARES
946
VIEWS
Share on FacebookShare on TwitterShare on LinkedIn

Back in the mid-1960s, the Hillsboro Spartans were a real force to be reckoned with when it came to the grid-iron. Legendary HillHi Football Coach Ad Rutschman had his best squad in the Fall of 1966. Rutschman was a terrific Spartan himself in the late 1940s and graduated as a top running back and went on to Linfield University where he was an All American Running. After college, he was offered a contract to play for the Detroit Lions. Instead of playing Professional football, Rutschman headed to HillHi. In his tenure at HillHi from 1955 to 1968, he was the head football coach and the head baseball Coach. Ad would lead the Spartans to 3 State baseball Championships and one in football- yes, that 1966 Squad. Coach Rutschman left HillHi to Coach football and baseball and remains the only coach in college sports history to win a National Title in Football and in baseball. Before he finished, his Ad won 3 national football championships and to go with the baseball trophy. No one has ever touched, nor likely ever will touch, what his legendary man did. 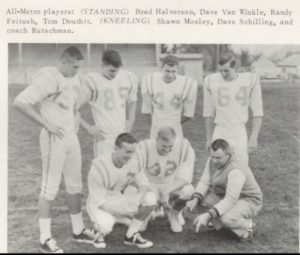 Back to 1966-  The Spartans were a very talented group of young men that season. Led by talented quarterback Gary Nall and a host of All-Metro players, the team was “solid.” Solid is not the word; they were loaded. Although he has coached teams with more talent, Coach Rutschman told the Herald that this team was tough and determined. They were the first team to play on Hare Field, which opened that Fall, and there was a desire by everyone to make a statement for the hometown.

Boy, did they. The Spartans won every game they played that season. Heading into State Championship against 11-0 South Salem, expectations were high. Before it was over, the Spartan defense stopped the Saxons from scoring at all, giving up only a safety. The offense posted 17 points led by 6’3″-225 pound running back Dave Schilling. At the end of the game, Schilling, Coach Rutschman, and the entire town rose victorious at Civic Stadium in Portland. It was a game and a season for the ages. Perfection. Full hearts, Clear eyes, Can’t Lose. 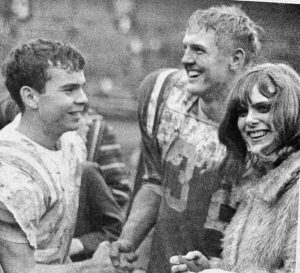 By any standard, Schilling was a phenomenal athlete. His college recruitment often led to speculation that he could be one of the best ever but that maybe he belonged at linebacker or defensive end. After all, how good could a big kid from a small town like Hillsboro really be as a running back?

One college coach was laser-focused on Schilling. That man was the “Great Pumpkin,” also known as Coach Dee Andros. The Oregon State Coach had been bashing teams with his 6’4″, 245 lb. running back Bill “Earth Quake” Enyeart, who was part of the 1967 “Giant Killers” team, was unstoppable and would finish his career at OSU with almost 4,000 yards rushing before heading to the NFL. The ’67 Team remains the only squad in US History to beat 3 teams ranked #1 or #2 in the AP Polls with wins over USC, UCLA, and Purdue.

Could Andros tap Schilling to be the next “Earthquake” and shake it up again in Corvallis? He grabbed Schilling, and the big kid delivered like a freight train. Look at his records at Oregon State. Almost 3,000 yards in 3 seasons carrying the ball making Schilling one of the very best backs in Pac (8)12 History.

In late 1971 Dave Schilling and his wife Becky were living the dream. He was a college star and had NFL scouts circling in.  She was expecting in late October and they were featured in the press on October 20th after Schilling ran for 157 yards and 3 TD’s on 47 bruising carries. Life was great, awesome in fact.

In 1972 Dave was picked by the Indianapolis Colts but never made it to the field as a Pro.  That is the way it is for most collegiate greats – but the big rumbler got his perfect season at HillHi and was named Pac 8 (Now Pac 10) RB of the Year in 1970 and just lost out to Bobby Moore (Ahmad Rashad) from Oregon.

Dave Schilling Dies – June 19, 1973-  The Hillsboro Argus featured a photo of a smashed-up car and the headline “Ex HilHi Footballer, 2 others killed“.  The news was that at about 9 PM two cars crashed just off of US 26 on Harrison Road near the Tillamook Junction.  Schilling, a female passenger, and another young man from Hillsboro who drove into Schilling’s car were killed.  Dave had taken a job as a Science teacher at Whitford Junior High in Beaverton when the deal with the Colts did not work out.  Maybe he was following in the footsteps of his great mentor and Coach.  The facts pale in comparison to the loss to the Hillsboro community and to Schilling’s family. 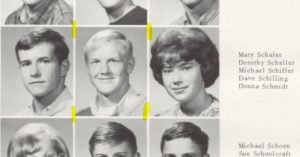 Why I wrote this story is to remember Dave Schilling and what he did.  Beyond that and even more to honor the fact he and many like him have been forgotten to time- more or less wiped away by growth, the passing on of people, and the fact that Hillsboro has grown nearly 600% since that time. The newcomers will never know about Schilling or anyone else associated with this story because they were not here.  Maybe this will reach some- giants have risen from this valley, men and women, all walks of life.  He was one of them.

Dave left behind his wife Becky and his daughter Tricia.  His parents Ken and Pauline have passed as have his brothers.  We have now confirmed that his wife Becky is living in Eugene and “doing very well” according to his daughter Tricia Schilling-Westgate who we spoke to in Australia.  She graduated from OSU as a Veterinarian but ended up raising children which she does today from down-under.  She sends her thanks to all who remember her father and his family in Hillsboro and beyond.

We reached out to some of his classmates via We Remember Hillsboro on Facebook  as well as Ad Rutschman for some words about who he was beyond football.

When we speak their names they come to life

What happens when we honor, remember, and speak the names of the fallen?  In many ways what was forgotten and what we lost is regained.  One memory leads to another and that leads to connections of people and places and events.  In those things is the power to heal the wounds of time.  Remembering Dave Shilling is one of those names and a young man who needs to be remembered as he was- #beautiful.

Editors Note:  Since beginning this story I have found out that another young man who was Dave’s classmate and the hero of the 1966 Squad had died just before the 1966-67 season.  That young man was Randy Feitush who many felt was an equally good athlete- on par with Schilling.  He collided with a car at the intersection of 4th and Jackson in historic downtown Hillsboro. 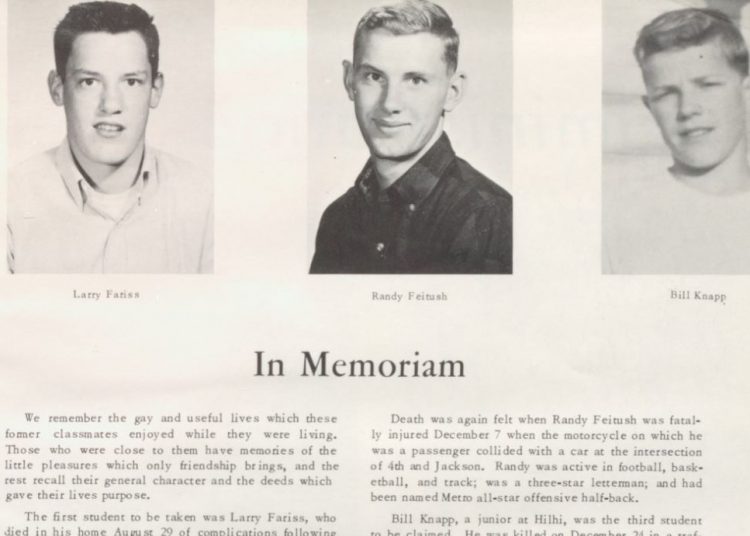 Also mentioned by teammate Dave Halstead above were teammates Steve Nelson and winning QB Gary Nall; both of whom died very young and were on the 1966 perfect team.

The Dave Schilling Award is given to the top senior scholar athlete who participates in multiple sports each year. An award is given to a boy and a girl. The award is voted on by all of the school’s coaches and is considered one the most prized honor to receive this award among the student athletes in the school.

The Randy Feitush Sportsmanship award is given to honor the student athlete in 3 different sports at Hilhi (football, basketball, and track and field). After each of those seasons, the coaches and athletes of those teams vote for the athlete who exemplified sportsmanship to the highest levels on the practice field and in the field of play.

Those young men continue to have a legacy at Hilhi. ; Coach Tim Kasper

The Hillsboro Herald will continue to uncover stories from our rich past about the lost and the fallen who epitomized the Hillsboro way; excellence, kindness, and achievement.

We Remember all of you young men of Hillsboro.

Could Electric Semi Truck Charging Be In Hillsboro’s Future?

Could Electric Semi Truck Charging Be In Hillsboro's Future?

Give The Gift Of Art By Shopping Visual Artisan Marketplace

2021 Could Be Downtown Hillsboro’s Break Out Year