No Result
View All Result
Home Our Town Environment

Owls Among Us Make Life Better

16
SHARES
655
VIEWS
Share on FacebookShare on TwitterShare on LinkedIn

Is it Hootie Hoo or Hootie Who? Maybe it is Hooty Hoo- well, either way, Owls are among us here in Hillsboro, Oregon.

A few days ago a longtime friend and HilHi classmate of mine, Cara McGowan, asked the community on NextDoor if people were hearing owls at night near Century High School and Francis Street.  She had been hearing the distinctive repetitive Hooting calls of what she assumed was a Great Horned owl.  Many of us in Hillsboro have owl stories and have had regular sightings.   But many newcomers and longtime residents have not.  Cara’s question touched off a great discussion and many comments about our local owls and all that they have been up to.  So it was time for the Herald to give a “Hoot” to our local owls.

Her question was quickly answered by other neighbors that they were hearing what she was hearing.  The distinctive pattern of calls between a male and a female great horned owl is unmistakable once you hear them filling the night sky with sound.  Here is a link to the sound itself and the pattern they use to communicate.  Have a listen.

The key to hearing any owl’s call is to have quiet in the surrounding area.  In a busy town like Hillsboro that is not easy anymore.  As kids, we would hear owls almost nightly along Rock Creek and in the open farmlands surrounding the city.  But that is hard anymore- so Cara was reminded of her childhood near McKay Creek in West Hillsboro when she heard these beauties. Her 4 AM walks provide her the chance to hear the owls in the woods and protected wetlands near her home.  There are owls, that are very territorial, thriving there.  It is very likely she was hearing the Great Horned owl as they are prolific here and adapted to survival in the modern urban landscape we live in.  Thankfully the man creeks and corridors that weave their way to the Tualatin River have been protected over the years by forward-thinking members of our community.

The responses to her question brought forth dozens of responses and some of those had photos offered up.  There were many owl stories as well.  These magnificent birds of prey are so silent and such skilled flyers, as well as the fact they are nocturnal, that we rarely see them.  Their feathers are a masterpiece of camouflage making them almost invisible during the days.   Here is a picture of a local Great Horned Owl (juvenile) provided by Ken Schreier of our community who said he got this picture up close and personal while the Mother screeched from the tree above. 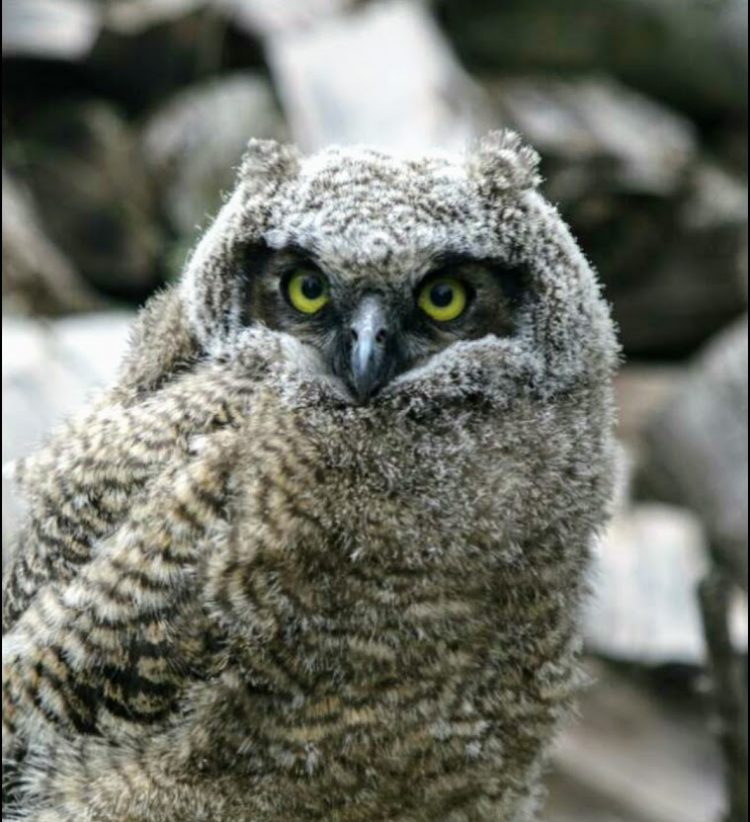 While they prefer not to come out during the day they can.  This owl was likely learning to move around and fly.  The downy soft feathers eventually give way to a more magnificent covering – these owls are among the Kings and Queens of the forest and are incredible hunters.  They feast on mice and rats and will eat snakes and other creatures at will.  Their talons, once they become an adult, are unbelievably sharp.  Their beaks capable of shredding and tearing all forms of prey.  For many of us, we will remember dissecting an “owl pellet” in science class. Owls often digest mice whole and what comes out is a skeleton encased in a hardened pellet.  Those come from Barn Owls typically.

When this little guy grows up to be a big boy he will look like this.  Here is a very old owl who lives West of Hillsboro on a high hill overlooking the Tualatin Valley.  He was caught in one of our chicken coops in 2020 and was planning to camp out and eat his way through the flock.  Well, he was trapped in there too because he had slid in through a 7-inch gap in a window but could not leave.   His mass was unable to slide back out, mainly because he ate a full-sized hen and was bloated.  His eyes are classic wise-owl and his feet speak to his age.  An owl expert told me this guy was well over 20 years old based on his size and the heavy feathers covering his talons.  This is the type of owl you are hearing when you hear the signature calls linked above. At the bottom of this story, you may want to watch the bonus footage of my epic battle to free this beast back to his forest lair. 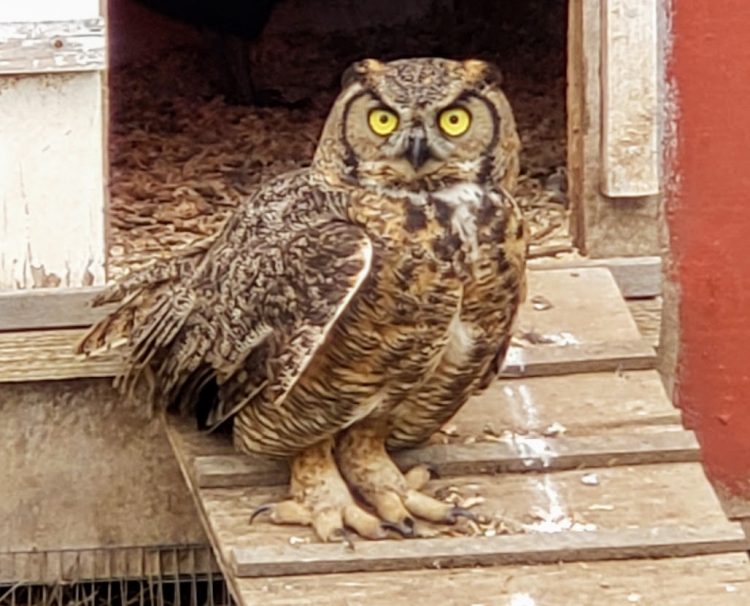 The discussion on owls that Cara started took a turn as to other owls seen in Hillsboro.  Several people in Hillsboro are reporting seeing another well-known species, the Barred Owl.  These incredible owls have no elevated ears or “horns” but round heads with eyes more set into feathers.  Lucky for us, Nichole Martin, who lives off of Century at the end of a long private lane has photos and film.  Here is what she shared with the Herald.

Watch this footage she shot of the owl watching Nikki’s family through their windows.


“We are on a hill n so it’s entry-level,  but towards the back of the house, it’s the second level.    So the owl is 20, maybe 25 feet up, and 10 feet from our dining room window.   Our living room is floor to ceiling windows.  The owls land in the trees and watch us quite often.   We also have a barn, and a bit of a rat problem,  the owls always find a tasty meal here. “

If you hear a barred owl you will know it- they sound like a witch or a demon screaming in the night when compared to the soulful patterned hoot of the great horned owl.  Have a listen right here if you dare!  Thanks to Nikki and the other folks in Hillsboro who reported many stories of barred owl sighting in our town- almost all are along wetlands and wooded areas of our fine city.

Barn Owls Amongst Us

Another very common owl in the area is the Barn owl.  Now, this is not the Barred owl- easy to get the names confused.  This owl is known as the Barn owl because they love to live in the upper reaches of barns. As a Realtor who sells a lot of acreages, I get a chance to see and interact with them every year.  There are usually 2 when I see them. On October 16th of last year, I was on the edge of South Hillsboro at the Gillenwater farm and was allowed to view the old barn.  We got a chance to see this beauty at that time and it wanted to let me know I needed to move along.  Here is the footage from that meetup.

Other owls I have heard sightings of in Hillsboro over the years include the Great Grey, the Western Screech, the Spotted Owl, and believe it or not the Snowy Owl.  What great creatures they are.  Among the many birds of prey we now enjoy here in our community, the owl remains the most elusive and in some ways the most interesting.  Thanks to Cara McGowan for starting the thread and thanks to NextDoor for being such a fun platform.  Thanks as well to the many great people at the Hillsboro Parks and Recreation Department who work to preserve habitat, the Audobon Society, the Tualatin River Keepers, and the great staff at the Jackson Bottom Wetlands Preserve.  Anyone and everyone who loves Oregon, wildlife, and the City of Hillsboro will want to protect our wonderful community and our Owls!  It is so important to us to do this- and if we talk about it and learn about them and other wild creatures, we can save them all and enhance their chances of survival into the future!

The Herald thanks all the great folks who participated in Cara’s thread and we wish you all a Hottie Who or Hootie Hoo 2021!