The City Of Hillsboro Plays Monopoly In The Name Of Jobs But Should It?

33
SHARES
1.2k
VIEWS
Share on FacebookShare on TwitterShare on LinkedIn

Warning:  This article includes researched facts and opinions of the writer.  Do not read on if that will offend you.  This is the first story on Project BaT in Hillsboro, Oregon, and on TIF financing in the Tualatin Plains that we have seen- we strive to bring real news to you.

The East Tualatin Plains were a magical place.  For locals who have quietly sat by and watched the transition to a concrete jungle the result is likely going to be more than they can handle.  At breakneck speed, the beautiful farmland that was rezoned for Industrial land via the “Grand Bargain” is being bought up, ripped up, and built up.  The signs of massive construction and growth are all around to be seen from Evergreen Road to Top Golf on Brookwood, and for miles to the West.  The push is on and there appears to be no end in sight.

The Herald has dug in on these matters and we have a keen interest in how a lot of this works.  At the driver’s seat right now, of the entire process, are the staff at the Hillsboro Economic Development Department, led by planner and manager Daniel Dias.    Backing him up and providing the taxpayer money, and approvals to use it, is the Hillsboro Economic Development Council.  You might ask who that is?

Well, that is a legal entity that is in fact the current Hillsboro City Council. The HEDC is the urban renewal agency for the City of Hillsboro. The governing board consists of the same individuals on the Hillsboro City Council, which is common among urban renewal areas in Oregon. The agency and its activities are funded by tax increment financing (TIF).   They are approving hundreds of millions of dollars in land purchases and road construction projects in North Hillsboro alone.

In total, up to $172,200,000 will be spent of the taxpayers’ money to create jobs and to buy property using Tax Increment Financing.    This form of financing allows a city to freeze the Tax revenues that the public and public agencies get at current value- raw land value in this case.  All of the future property tax revenues, for a period of time, are captured and used to pay back loans that the City will obligate the taxpayers to.  Those loans are being used to buy land, install streets and utilities, pay for planning and consultants, etc.  This makes the Hillsboro Economic Development Council and Dias the biggest players at the biggest monopoly game being played in Washington County.

The most recent land and corporate deal happening in Hillsboro now is Project BaT. Before we dive into that let us ask if Tax Increment Financing is needed?  Is it a good thing?  What are the downsides?  This article written by Bloomberg City Lab takes issue with the method.

Professor David Merriman of the University of Chicago Lincoln Institute of Land Policy told Bloomberg this.

“In the end, it can be a valuable mechanism,” he said. “It’s not something I’d like to get rid of—but it deserves a lot of scrutinies because public sector dollars are being re-routed into a different task, away from general-purpose funds.”  he continues; “On average, [TIF] may be moving development from one part of the city to another, and changing the timing of the development, but there’s not more development than would have otherwise been made,” Merriman said.

The bigger issue is that often times the City is able to circumvent typical budgetary requirements and oversight.  There are not as many checks and balances as to how the money is used.   Even more importantly this TIF money is not magic – someone has to lose revenue for the City to have this money to spend.  In the case of Hillsboro, our school district lost over $1,000,000 in revenue in 2018 & 2019 alone, and the City of Hillsboro lost over $750,000 during that same period. 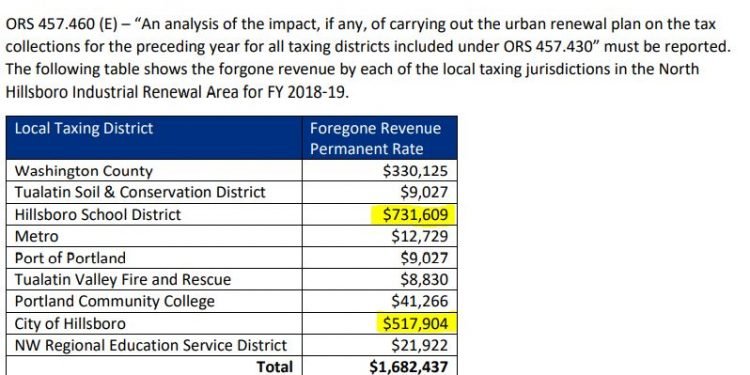 Effects of TIF programs in 2019 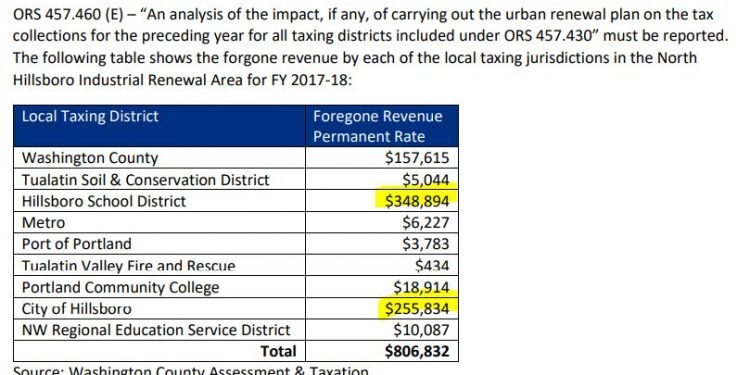 Effects of TIF programs in 2018

TIF financing has been used for decades and Cities love to use this method.  Basically, this is a way to creatively rob Peter to pay Paul.  Poor Peter.  Mayor Richard Daly, the famous crooked of Chicago, used TIFs to spend hundreds of millions of dollars with little to no oversight.  That allowed graft, theft, cronyism, and poor decisions.  Chicago continues to use TIF for over 660 Million dollars a year in projects and corruption has been a standard criticism of the windy city.

Now that you understand the sort of money Hillsboro is able to spend to actively develop properties to attract jobs we have to ask, should we?  The Herald spoke to several commercial developers in the area about how they feel in regards to having to compete with a city for land and projects.  Those willing to respond wanted to be off the record, but none felt strongly that the market needed Hillsboro to be doing this as a City.  The area is hot and the need for Industrial land is great.  Companies like Trammel-Crow and Majestic Development, and the like, are more than capable of buying and developing these same sites.  In a great real estate market like the one we have now the feeling from that group is that this is not needed.   If the market was dead and demand was low then TIF funding seems like a needed or welcome option.  As it stands the area is developing so fast that we may be rushing too quickly to grab jobs that we don’t need. When a great new firm comes with the elusive “High Paying Jobs” that the Grand Bargain promised we may not have any land nor any TIF money left.  One has to wonder.

The last thing I will tender on TIF and on the City Of Hillsboro / HEDC playing Monopoly is, should we?  We already have so many jobs we can not fill them all.  Ask yourself this.  If we slowed down a bit wouldn’t housing costs and traffic systems have a chance to catch up?  Wouldn’t our people be better off?  As it is hundreds of more jobs create stress on the schools, roads, and housing problems that we have failed to deal with now.  More jobs later, after a reasonable pause, seems reason enough for the City of Hillsboro to take its sizable foot off the gas and not be in such a hurry.  Just an opinion but one worth considering.

ENTER Project BaT – Who and what is it?

Let’s take a look at the most recent Land push that the Hillsboro Economic Development Council, led by Dan Dias, has funded and sold.  The HEDC bought over 40 acres known as the Reilley Property. The land was owned by the Spokane Humane Society.  It is landlocked and lacks basic services like sewer and water until they are extended.  This was a property that many private developers wanted but Hillsboro?HEDC swept in and grabbed it up using TIF financing to get the property.

Dias and his staff had a buyer waiting in the wings it appears and it did not take long for them to broker a sale to Trammel Crow of Texas.  TC bought the land from Hillsboro for the same price Hillsboro bought it for.  The new ownership is now called TC 3600 HUFFMAN LLC.    They have a tenant for the property which is being held in complete secrecy.  No one but a few knows who it is nor what its ultimate use is.  Dias has been forthcoming with the Herald that this user will generate 300-400 jobs and that TC 3600 bought about 18 acres of the 45 the City just recently bought.

Here are some photos of the site and what is happening:

The Herald sent a list of carefully crafted questions to the City of Hillsboro and Dan Dias himself answered these as completely as he could.  There is secrecy.  There is $21, 570,000 of TIF money at play to land these jobs.   This project was approved with almost no public input- people did not participate and the process did not ask for involvement beyond a 200-foot property owner radius.    Dias is a sharp employee and a big asset to Hillsboro.  We are lucky to have him in so many ways.  Having said that he has tremendous power and wields it skillfully.  Those who have been at meetings or hearings where he weighs in will find out that his resolve and ability to execute real estate deals and ways to make things happen are substantial.   He has perhaps been hands-on with more growth-related projects than any employee in Hillsboro history.  Here is our interview:

If you read the Herald you know we like to pose questions and make all of us think and discuss what is happening to our town.  We hope that you learned some things from this story.  We worry for our schools and fire departments and other agencies who will be losing millions while we pay to fund more jobs.  TIF financing is a good tool in a bad economy. We do not think it is needed or warranted here and that is just a matter of informed opinion.  There is a palpable and growing sense that the people trying to live here are at odds with the companies and even with our own City government.  What we may all be at odds with is the failure of our town to provide housing at reasonable costs, roads that travel openly, and safer streets.  Are we Portland?  Are we the Bay Area?  No- not yet.  I would like to think, for one, that stories like this and the good people of Hillsboro will have something to say about all of this before it is too late.

The Hillsboro City Council vote every time that TIF money is expended and they need to hear from you. We will endeavor to inform you as we are able when those opportunities arise.

Is this our future forever?  Or can we do better? 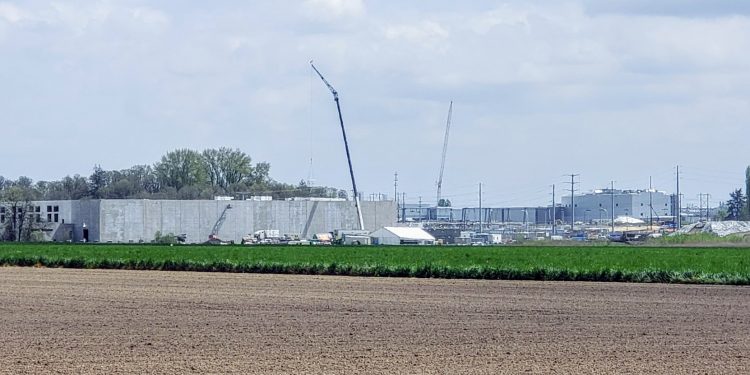 2021 Could Be Downtown Hillsboro’s Break Out Year

Incredible Doll House Being Raffled Off To Benefit VFW